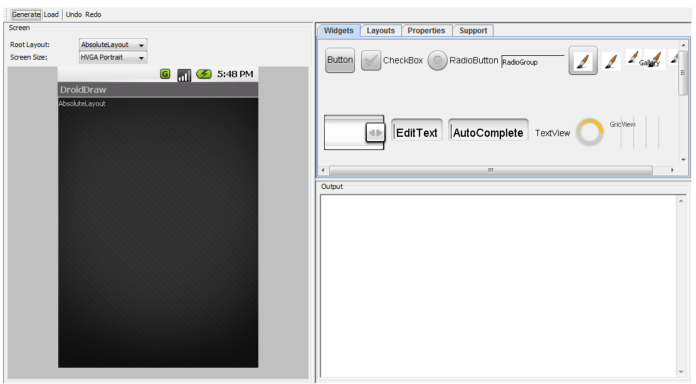 For those who are getting started with Android website and application development, the process can be quite daunting. With so many devices, websites, tools and options available, it’s hard to know where to start. In this article we will point out the basic software you’ll need, some tools to make the job easier, and some websites you can go to for development advice and tips.

The first question you have to ask yourself is whether you are interested in creating native Android applications (apps which take advantage of the native functionality provided by specific Android devices), or web apps (apps which may appear to be normal Android apps, but are actually web-based apps created with HTML5, CSS3 and JavaScript). The requirements for each task is different…so we will cover native app development in this article, and web app development in the next!

If you are getting started with native Android app development, the first thing you need to know is that you will be using the Java programming language to actually create the apps. If that scares you, you may want to move on to the section on App Inventor below–it requires no serious programming skills.

Software and Hardware Requirements for Using the Android SDK

If you’re still reading, then you’ll need to get the prerequisites out of the way. Initially, you need to have a development machine that is running any of the following operating systems:

Of course you will need a development environment, and the Android SDK includes support for the Eclipse IDE when it has the Eclipse JDT plugin installed (more on that later). You will also have to install the Java Development Kit (JDK) version 5 or 6–just having the Java runtime engine installed is not enough. If you are not comfortable with the Eclipse IDE, you may use the Apache Ant 1.6.5 IDE instead (it’s available for all three supported operating systems as well).

Obviously you will need enough hard drive space on your computer to install Eclipse and/or Apache Ant, but you will also need room to install all the tools and add-ons that come with the Android SDK, including SDK Tools, Platform tools, each Android platform (you can download SDKs for each version of Android that has been released), USB drivers, sample apps, SDK add-ons, and documentation. If you were to download all of the above, you would need approximately 750 MB of free space on your system.

Installing the Android SDK is not difficult–you just visit the Android SDK download page, download the package that is appropriate for your operating system, and decompress and/or run the installation file. You will want to install it in a directory that is right off of your drive’s root, (such as C:\SDK) so that it is more easily accessible.

Once you have installed the SDK itself, you will need to install the ADT Plugin for Eclipse (if you will be using Eclipse). The ADT plugin allows you to use Eclipse to create new Android projects, application user interfaces, and even add additional components from the Android Framework API. Once you have an app created, it enables you to debug your apps and export .apk files (the Android application setup files) for distribution.

Once you have installed the Android SDK, you can start it up, which will in turn open up the AVD Manager. The AVD Manager is a tool that comes with the Android SDK that is used to download and install the various components used by the SDK, included additional SDKs for previous Android platforms, third party tools and APIs, samples, USB Drivers, SDK tools and more. It can take quite a while to download and install all of the available options, and if you aren’t going to develop for Android 1.5, for instance, you don’t really need to download that particular package, so you can save some time and space. You can also choose to install some options, but save others for later.

From there, once you have installed all the required software and tools, it’s time to visit the Hello World Android App Tutorial and begin building your first app!

There are many tools available to help you through the Android app development process, including tools for creating the user interface (UI). One such tool, DroidDraw Beta, is a free WYSIWYG UI designer for creating smartphone and tablet apps. Just like the Android SDK, it’s available as a free download for Windows, Linux and the Mac OS X operating systems, or you can use the online version, which looks like this: 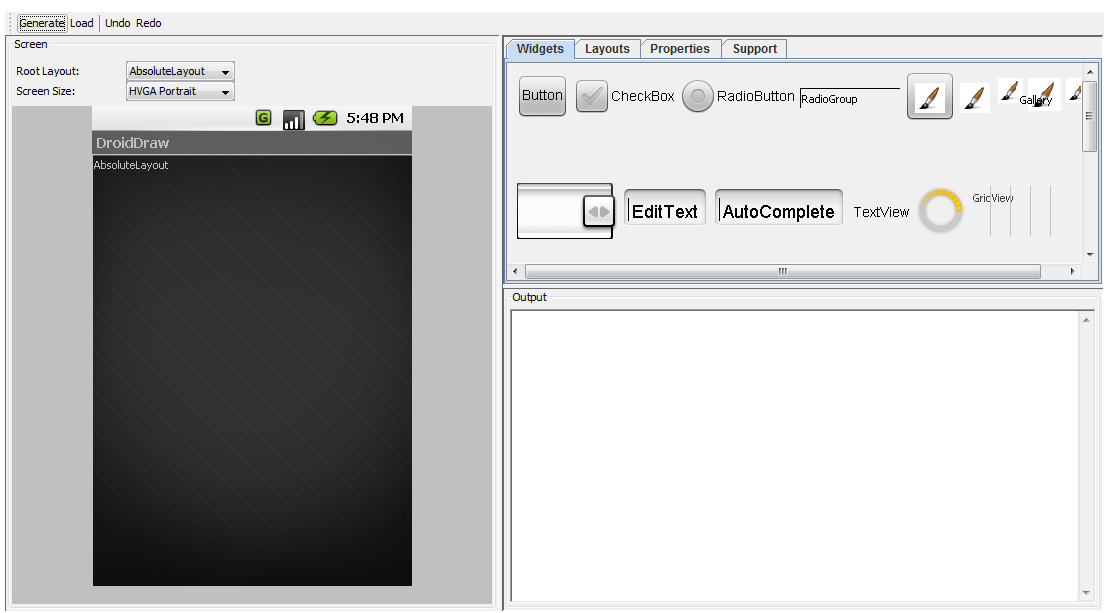 A DroidDraw Android app is also available for download. It allows you to use your own Android device for testing and design purposes along with the DroidDraw application.

Another interesting Android app development tool comes from Google themselves. Aptly named App Inventor, the tool allows you to create an app through a browser-based interface. You are able to create the UI, set the app’s behavior, and test the app on your phone when you’re done, all through a slick WYSIWYG interface as shown here: 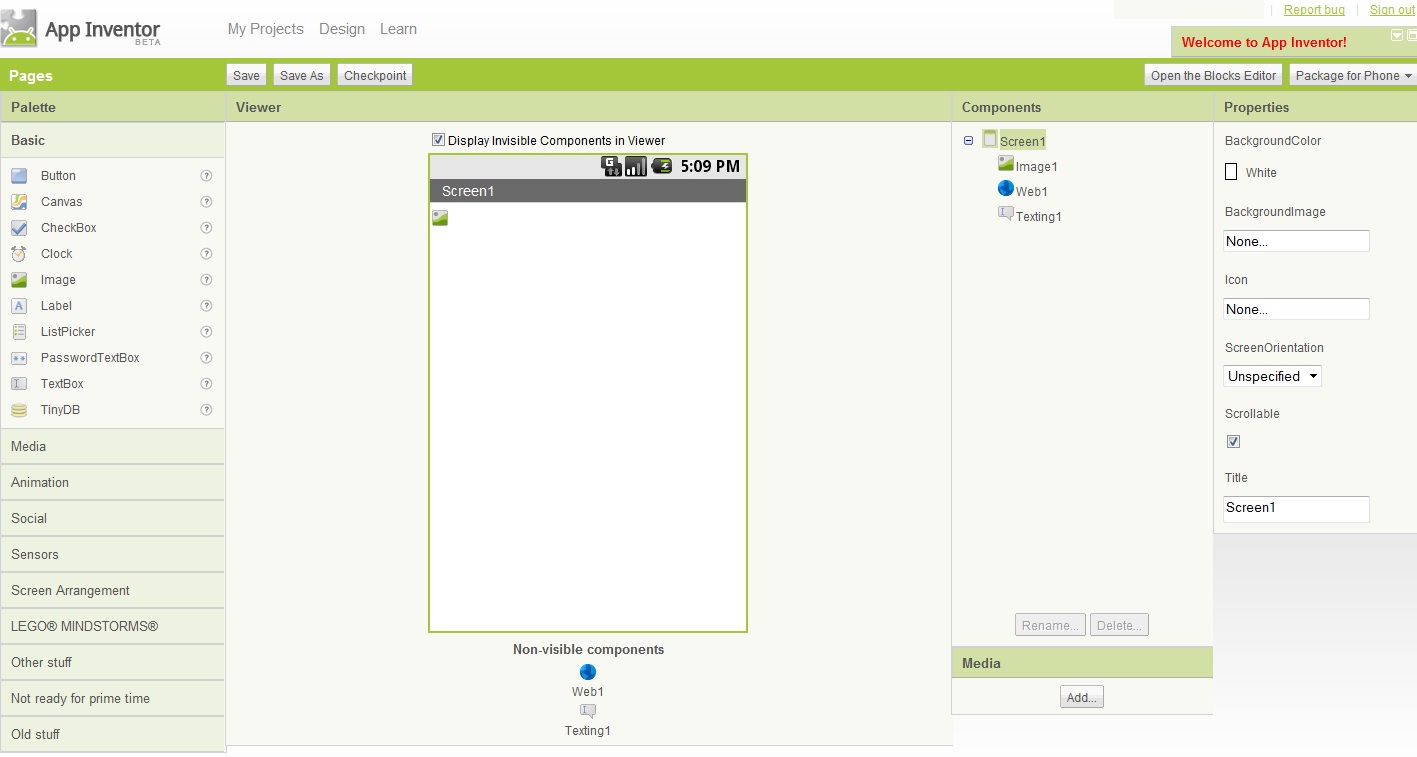 Although we have already covered a lot of ground, there are some really valuable resources for Android developers out there. Here are some of the best we’ve found:

If you know of a resource we’ve missed, please use the comment form below to let us know so we can add it to the article!

One more thing: totally unrelated to Android development, but if you are ever in need of an online image editor that can make transparent backgrounds on GIF, JPG and PNG images, be sure to check out this Online Image Editor. I am a writer, developer and programmer, but graphic artist, I am not. After trying countless other tools, I found the Online Image Editor to be extremely easy to use, and it does the job, quickly, effeciently, and for free. To me, when you find a good thing, it’s worth sharing, and with that said, I’ll see you next week!