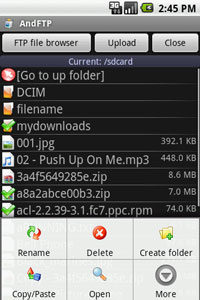 As an avid Android device user with both an Android tablet and phone, of course I am always looking for apps that would be of use to web developers. After a bit of searching I was able to find apps for just about every aspect of web development, from the web server itself to an FTP client to move the files, to a source code viewer that let’s you view the source code on any web page, analytics tools to allow you to analyze your website, to custom apps for the major CMSes WordPress, Drupal and Joomla!.

Using the Android web development apps I found, I was able to create a web page from scratch, test it on a web server that is running on my Android device from anywhere on my local network, move the file over to my external web host using an FTP app so it’s live on the web, SSH to my external web server to work with the file live, and the page was ready for the masses, able to be viewed by anyone with an internet connection. My inner geek was smiling!

While the likelyhood that I would need to be able to create content or handle a “web emergency” while I was out on the go is not likely for me personally, I could easily see a blogger writing their latest work while actually on the scene of an event, and then using one of the tools we will discuss here, they would be able to instantly publish the blog to their website, complete with images. Yes, you could actually update your website while you’re sitting on the beach enjoying the breeze, or more likely, while you are on the scene of some major event, be it a trade conference or accident scene.

Let’s get started, and take a look at some Android web development apps. 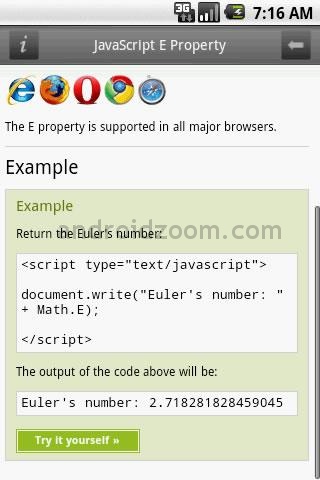 Properties and methods of each object are detailed, along with examples for each. This is a great resource, and covers all built-in JavaScript objects, browser objects and HTML DOM objects.

The kWS – Android Web Server is a very basic web server that runs on your Android device. It isn’t a surprise that a web server can run on an Android device–after all, Android is based on the Linux operating system. What is surprising is that it is so very lightweight and fast that if you are loading pages from it through your local wifi network, you won’t be able to notice a difference from any other web server that you access. 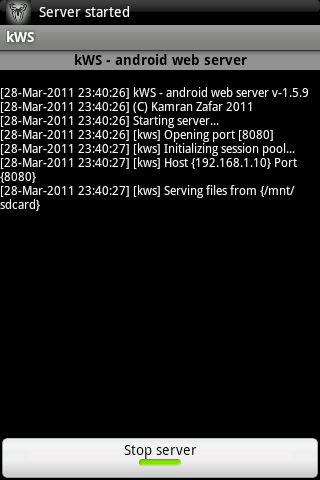 The kWS web server implements HTTP-1.0 and is capable of hosting most file types, and works like a typical web server. You won’t be likely to be running your website off of this server permenantly, but for testing out a page, it comes in very handy.

If you are used to working with Google Analytics (GA) for your website, you will be very likely to want to install and use the Analytix app. It provides you with access to most of the details from your Google Analytics account–almost in real time. It provides hourly views and clean visualizations, which comes in very handy for SEO work. 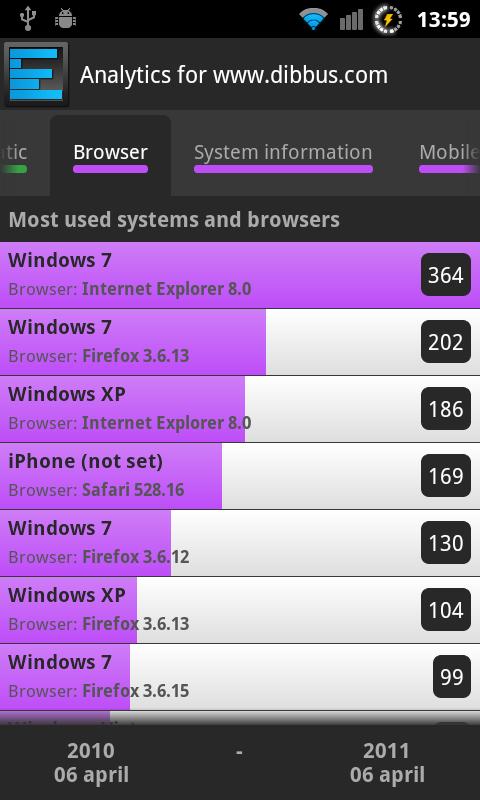 There are other GA apps out there for Android, but in my opinion, Analytix is the only one worth installing and working with.

Although it may seem that being able to view the source of a web page is something common to all web browsers, once you are using an Android device and the stock Android browser (and even other browsers on an Android device), you quickly realize that “View Source” is not a standard function on Android devices. Enter the View Web Source app, which works just as you would expect. 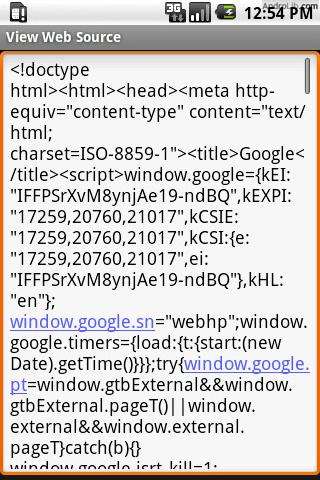 All you have to do is to enter a URL, then you are presented with the page’s source code, which you can then copy to your device’s clipboard for use later.

If you are a typical developer, you have probably worked with at least one of the top open source content management systems (CMSes). I looked for Android apps which would allow me to work with each of them, and was able to find one or more apps for each CMS. We’ll start with the WordPress for Android app. 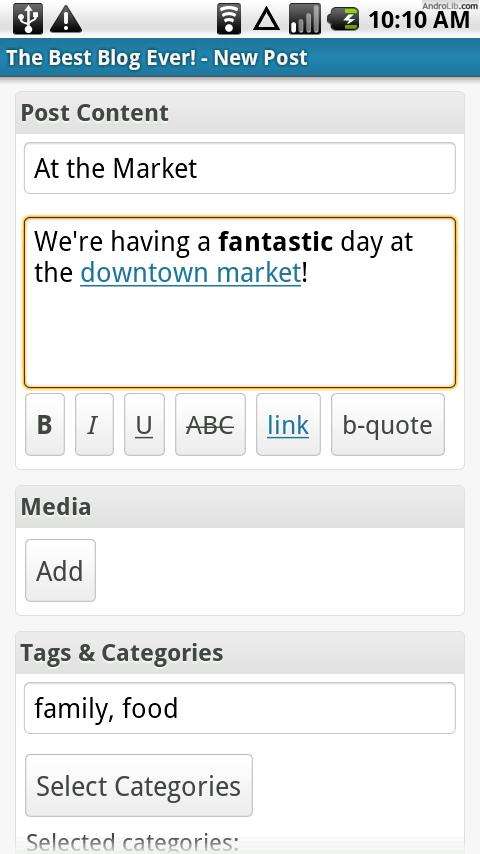 WordPress for Android is, like WordPress itself, an open source app that allows you to create new posts, edit content, view stats and manage comments–and it comes with built-in notifications, so you’re kept up to date as you work.

Having a Drupal site myself, I definitely wanted to check out the Drupal Editor app. 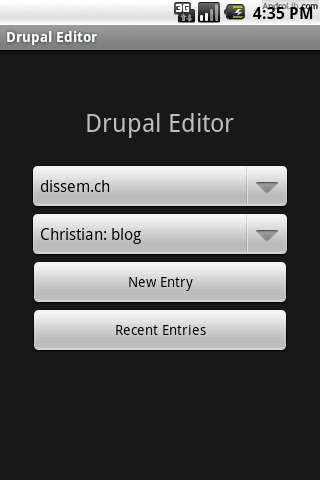 Like the other CMS apps, it allows you to create, post and edit articles on the site. The Blog API has to be enabled in order for the Drupal Editor app to work, but if you run a Drupal website, this is a simple tasks.

Since I also have several Joomla! websites, I was eager to try out the Joooid 1.1 Editor app. It allows you to publish articles that include HTML text, images, galleries and maps which include the GPS-determined position where the article was published.

Like the others, I installed the Joooid 1.1 app to my tablet, installed the plug-in which went with it on my Joomla! website, and tried it out. Nada–several error messages later and some Google searching and I found out that the version of Joomla! I was running (version 1.6), was not compatible with Jooid 1.1, but that Joooid 1.2 beta would indeed do the job. 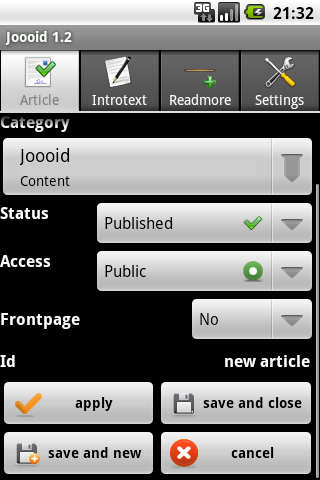 I downloaded and installed the beta plugin and Joooid 1.2 beta Joomla! Editor, following the installation instructions on their website, and within 10 minutes I was creating content and working with my Joomla! website–through my Android device.

Sure, Android devices come with a rudamentary text editor, but it’s not really made with the intention of people using it for editing web pages. That’s where Webmaster’s HTML Editor Lite comes to mind. It not only allows you to edit HTML, it also enables you to edit and work with CSS, PHP and JavaScript, and features syntax highlighting and code completion. While you may not have a reason to use an SSH or telnet client often, when you need one, nothing else will do. I found the ConnectBot SSH Client app to be the full-featured SSH client I was looking for. 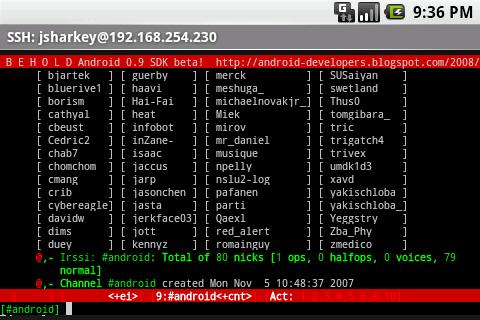 ConnectBot is a Secure Shell client that allows you to connect to your web server, so you are able to transfer files back and forth, make edits and run commands on your remote web host, directly from your Android device.

We’ve pointed out some web development apps for Android devices that can save you time and provide you with a way to let your inner geek shine–because it’s just too much fun to be able to create, develop and deploy websites–using your smartphone or tablet. And we only scratched the surface–there are countless other web development reference apps, knowledge testing apps, cheat code apps and more for the Android-loving web developer.