The addition of the Progress element to the HTML5 spec has opened a whole new avenue for providing visual feedback on long-running tasks. In the Using CSS to Make a Visually Consistent Cross-browser HTML5 Progress Bar article, I demonstrated how to turn off the browser's default styling in order to give the Progress Bar element a consistent appearance across browsers. Beyond that, we went as far as to introduce different color schemes and even gradients to our progress bars. In today's article, we'll see how advanced CSS3 properties can be employed to do things that Web developers could once only dream of.

The Progress element itself is quite simple to use; just include the <progress> tags in your document and voila, you've got an indeterminate progress bar. That means that the indicator will simply bounce back and forth across the element (like a cylon eye!). For a determinate progress bar, you'll want to include the value attribute and optionally the max as well. The value attribute specifies how much of the task has been completed whereas the max specifies at what number the bar would take up the entire element, indicating the point of task completion. If omitted, the max attribute defaults to a value of 1. The reason is that both numbers may be integers or floating point so that a value of 0.2 would equate to 20% completion, without the max provided:

Now that we've got the basics out of the way, here's a type of progress bar that emulates the look of a candy cane, or that of a classic barber shop pole. You may not remember these, but here's what they look like: 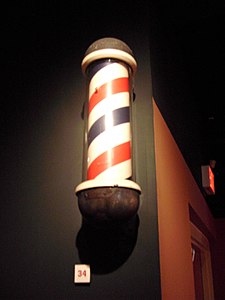 This time we'll set the value at 0.5 so that it's half full:

Every part of the progress bar element, including the element itself, meter, and background, may be altered using CSS. This particular example goes further than applying candy stripes to the meter bar by adding shadows, rounded borders, and padding to give it a more three dimensional appearance:

The stripes are achieved using the CSS3 linear-gradient. It accepts a direction parameter as well as a series of color stops:

Colors may be defined in several ways, including by named colors or the rgba() function, which provides a fourth transparency parameter.

Here is the resulting Progress Bar:

Our second example includes a couple of extra effects, including a left-to-right gradation as well as animation. The animation is achieved using the CSS3 webkit-animation and @-webkit-keyframes selectors.

Unfortunately, the following jpeg does not do the animation justice. To see that. you'll just have to try out the code yourself!

Note that today's code will work in most, but perhaps not all browsers. All code was run on Chrome v37 on Windows 7. To support every browser, you'll need to use the equivalent CSS rules for those.

It's hard to believe that an animated candy stripe progress bar can be created without resorting to anything other than CSS! And it certainly doesn't end with candy striping; if Lea Verou's CSS3 pattern gallery is any indication, we could be seeing a lot more creative progress bars in the near future. Maybe you've built one yourself. If so, I'd love to hear from you!

Rob Gravelle resides in Ottawa, Canada, and is the founder of GravelleWebDesign.com. Rob has built systems for Intelligence-related organizations such as Canada Border Services, CSIS as well as for numerous commercial businesses.

In his spare time, Rob has become an accomplished guitar player, and has released several CDs. His band, Ivory Knight, was rated as one Canada's top hard rock and metal groups by Brave Words magazine (issue #92).