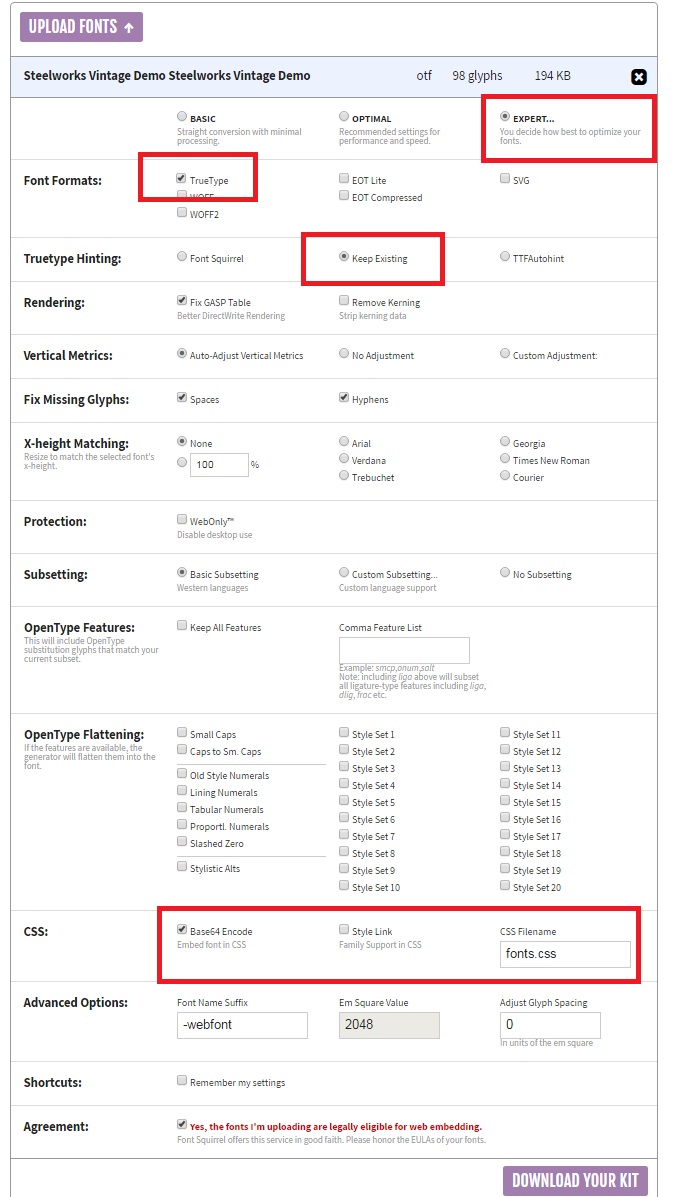 There is some debate among web developers about the performance advantages of embedding images and fonts directly into the page using Base64 encoding. Some contend that it improves performance by keeping http requests to a minimum while others argue that the file bloat caused by base64 encoding offsets any gains achieved by cutting down on the number of server requests. Moreover, opponents of direct embedding assert that after the first page load, font files should be cached just like the CSS files that declare them and therefore immediately available. Disagreements aside, a situation may arise where you don’t have much choice in the matter. For instance, if you don’t have a means to upload files to the server or if you are working behind a firewall – like I do in my day job – that blocks storage servers. Should the conditions present themselves for you to turn to embedded fonts, knowing how it’s done will make the whole process much smoother.

What is Base64 Encoding?

Base64 is an encoding scheme that converts binary data into text characters. It’s required where a protocol may interpret binary data as control characters (e.g. a modem), or interpret certain patterns as a special character combination. For instance, FTP translates line endings. Historically it has been used to encode binary data in email messages where the email server might modify line-endings. In HTML, it is necessary to encode the data to avoid characters like ‘<‘ and ‘>’ being interpreted as tags.

Base64-encoded data in embedded into the HTML via a data URL scheme. It was defined in the Internet Engineering Task Force’s RFC 2397 specification. Although the IETF published the Data URL specification in 1998, it was never formally adopted as a standard. Nevertheless, the HTML 4.01 specification referenced the data URI scheme, which, despite years of neglect, led to all modern browsers implementing some degree of support for Data URLs.

The URLs are in the following format:

The following embedded image renders a red dot in the bowser:

Here is the resulting image.

Applying Base64 Encoding to Fonts

Factors to Consider when Embedding Fonts

As alluded to at the start of this tutorial, although employing embedded fonts does cut down on the number of HTTP requests, there are other factors that come into play:

So now that you understand how to use data URIs in your web pages, how do you actually create them? There are a few different options available.

Use an Online Converter

Fontsquirrel’s online webfont generator is a great free tool. Just upload a .ttf or .otf file, choose your settings and click a button to create a whole kit. If you select the Base64 Encode option, it will even generate the CSS file for you. Here are the pertinent settings:

Using the Base64 Command

In OS X or Linux, the built-in base64 command in Terminal/shell will generate the Base64-encoded string for you:

Have you utilized Base64-encoded fonts in your web pages. What were your impressions of it? Leave a comment below and tell us about it!