With the emergence of HTML5, there is a strong need for HTML5-aware IDEs. The California-based company Aptana has stepped up to the plate with version 3 of Aptana Studio. Touted as a “professional, open source development tool for the open web”, I thought that it was high time that I put it through its paces and give it the once-over. I am happy to say that I was delighted with what I found.

The Aptana Studio IDE is based on Eclipse, but with a slant towards JavaScript development, which Aptana has long been known for. It comes in both a Stand-alone Version and as an Eclipse Plug-in. The stand-alone version is quite a large file (130.7 MB for Windows), so I would recommend getting the plugin if you already have Eclipse 3.5 or higher. Both editions are available for the Mac OS X, Windows (x86 – x64 Compatible), and Linux operating systems.

Aptana Studio relies on a few third party tools, including:

Intellisense is one of the main reasons to use an IDE for web development. When editing HTML files, Code Assist not only displays a list of matching tags, but it also includes graphical information about the level of support for each element in the major web browsers:

The parser is also able to identify in a treelist all of the CSS, JavaScript, HTML, and PHP/Ruby objects/tags. The links and definitions of those objects are fully searchable.

In this area, Aptana Studio shows some bias towards Ruby & Rails. There is a fully integrated Ruby & Rails debugger that has all of the features that you would expect from a professional grade product, including the ability to set breakpoints, inspect variables, control execution, etc…Surprisingly weaker is JavaScript debugging. The Aptana site says that it’s coming soon. Let’s hope so! In the mean time, might I suggest using the Firefox Firebug extension.

When you first launch Aptana Studio, you will see a blank workspace, as shown below. Unlike other IDEs, the interface comes with a black background by default which is supposed to be easier on the eye than the standard white. 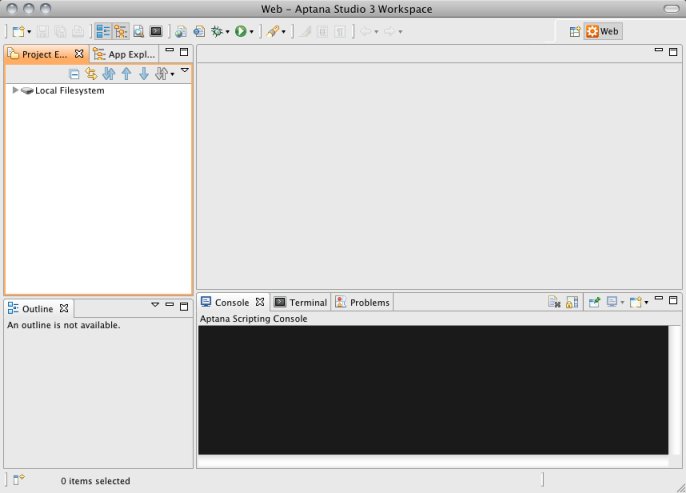 There are several ways to create a new project. You can do one of the following to trigger the project creation wizard:

Depending on the type of project decide to create, you will need to fill in the appropriate fields and hit finish to create the project. The project will then show up in the App Explorer.

It used to be that FTPing your files to the Web server was all that was needed to deploy your website. Not so with modern web apps. For those, it helps to have a good deployment mechanism in place. Here too, Aptana Studio can be of service. It supports Capistrano, Engine Yard, Heroku, as well as the more traditional FTP, SFTP, and FTPS Deployment.

Of course, any IDE worth its salt has to have some kind of version control. Aptana Studio has built-in support for no less than five version control products, including Git, Subversion (my personal fave), Mercurial, CVS, and Perforce.

At the file level, the Quick Diff feature highlights the line numbers for all lines of code that have had changes made since your last save, which helps to track your changes as you code. Right-click in the gray margin at the left of the editor and select “Show Quick Diff” from the context menu to toggle the Quick Diff feature on and off. The General tree in the Preferences window offers some options for the code change highlighting feature as well.

While there’s no doubt that Aptana Studio 3 displays some weakness in a couple of areas, such as in JavaScript debugging and PHP development, it also has a lot of strengths. I would even go so far as to say that it could be considered to be one of the front runners of the open source IDE arena. It’s especially well suited for Eclipse users who want to leverage their existing knowledge without having to shell out a lot of money for something like IBM Rational Software Architect.

Facebook
Twitter
Linkedin
Email
Print
Previous article
JavaScript-based PouchDB Supports HTML5 Data Store
Next article
Getting Started With Android App Development: Eclipse and the Android SDK
Robert Gravelle
Rob Gravelle resides in Ottawa, Canada, and has been an IT guru for over 20 years. In that time, Rob has built systems for intelligence-related organizations such as Canada Border Services and various commercial businesses. In his spare time, Rob has become an accomplished music artist with several CDs and digital releases to his credit.