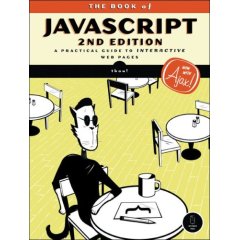 Any series of characters between quotes is called a string. (You’ll be seeing lots of strings throughout this book.) Strings are a basic type of information, like numbers–and like numbers, you can assign them to variables.


To assign a string to a variable, you’d write something like this:


The word thau! is the string assigned to the variable my_name.


You can stick strings together with a plus sign (+), as shown in the bolded section of Figure 2-6. This code demonstrates how to write output to your page using strings.

<!– hide me from older browsers


assigns the string “there are” to the variable first_part. Line Y,


NOTE: The methods shown in Figures 2-4 and 2-6 are equally acceptable ways of writing there are 86400 seconds in a day. However, there are times when storing strings in variables and then assembling them with the plus sign (+) is clearly the best way to go. We’ll see a case of this when we finally get to putting the date on a page.