I wrote a piece, not too long ago, that I titled, The Ten Things They Never Tell You About Starting an E-Business. It was a list of information that never really comes to light when the first boss proclaims that the company must be online. Number Four reads:

Unless you know what you're doing, get help building your Web site.

All too often, I see first-time sites being set up to represent a business. I have visions of a business owner attempting to save a few bucks by buying HTML Goodies and putting up the pages him or herself. Sometimes the pages look pretty good, but often enough, the pages look like, well, a person's first Web site. Then again, sometimes the author pops up a good one.

Today's site IS a first time site built for a hotel in Central, Southern England. The author did a fairly nice job. Let's take a look.

Concept: Might you be planning a trip to South Central England? Well! Do I have a place for you. The New Park Manor Hotel looks like the epitome of the English Country Manor. The building is beautiful. The grounds are stunning. The rooms are plush and immaculate. And the food! Oh, the food! How do I know all this? Why, because it is all on the Web site.

Praise: I have spoken a great deal about the concepts of traditions and expectations of a Web site. This site is dedicated to a country manor that wants guests. The main audience is made up of people looking for a place to stay, or hold a Wedding. The site itself is built just for those people. The site is made up of pages filled with lovely images (although maybe a little small sometimes and not as crisp as they could be) that sell the manor.

But all of that asidelet's go to the country! 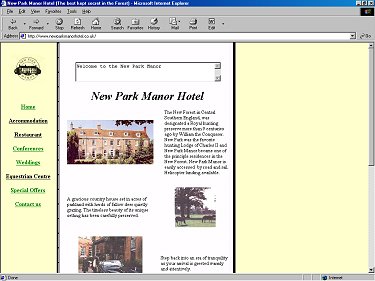 1. Concern: What are we trying to get across here? This is basically an advertisement for a country manor. When I think of a country manor, I do not think of high tech. In fact, I don't want a lap top connection in my room. I don't want 557 channels off of a huge satellite dish. I want simple, calm surroundings that make me forget about my job. This is a place to be at rest. That said, the homepage has a fancy scroll inside of a TEXTAREA box right up at the top of the homepage. That is simply against the grain.

Suggestion: Lose it. There's no saving it, there's no changing it, there's no helping it. Granted, it is a neat effect, but it is way out of place here. If you want to post the manor's specials, that's great. Find a section of the page and set apart the text on the page, but make it text, not a scroll.

2. Concern: Let me stay on the text for one more. You're using the default font, even on the headings. The subject of this page is an English manor. I would think that you could use a text font to further the site's killer app.

Suggestion: Start with the heading. There has to be a better font that is more representative than what you have. If you pick a font that isn't common, then turn the heading into an image and post the image. As for the other fonts, try setting them to a common, yet a little more regal font. Try Garamond. See how that goes.

3. Concern: You have rollovers on the left hand side, on the stripe of color. By the way, I applaud you on the color choice. It's very nice. However, in terms of rollovers, I believe that the visited and unvisited colors should always be set to the same color. Why? Well, because you've set a color scheme with the border and then the color of the links. If you have visited links show a different color, you break the scheme. Some might argue that the visited link color simply adds to the scheme. I don't buy it. I think it makes the page look haphazard.

Suggestion: Set the visited and unvisited link colors to the same color. Keep your scheme consistent.