While surfing and looking at sites for today's design newsletter, I guess I just hit the wining streak of sites that had background music. I ran into five in a row. Yahtzee!

Let's talk about both music and the way of the Web.

Do you have music on your pages?

If you do, do you like to go to a site that has music on the page?

I don't mean music to download either, I'm talking about music that simply begins playing either through the Netscape approved "EMBED" or the Internet Explorer driven "BGSOUND" flags.

I find it interesting that when I ask those two questions back to back I often get two different answers. I had one student inform me that he put background music on his page because it fits his page's theme. The same student said he dislikes background music on a page when he surfs. Huh.

Do you like music to come up when you're surfing? What do you do when that music does come up? Do you let it play? Do you immediately look for a button that will turn it off? And what if you cannot find a button to turn it off, then what? Do you simply put up with the music or do you leave?

If my research is any suggestion, you probably leave.

Why is it that when music plays, it evokes a negative reaction in Web users, even those that have music on their own sites?

I believe the answer is in how the Web is constructed and "surfed." Advertisers want the Web to be seen as what's known as a mass medium. That means a single source broadcasting to a mass of people. Television is a mass medium. Thursday night at 7 central, Friends is on NBC. That's your choice on NBC...Friends. The end. Watch it or don't. If you do, you are participating as part of a group. That's a single source moving to a mass audience.

The reality is that the Web is not a mass medium. It is a one-to-one medium. NAPSTER, speaking of music, has driven that point home with a sledgehammer.

When you get on the Web, you go to sites at your own whims and wants, on your timetable, when you want, and for how long you want. Visiting a site is a personal thing. You need not wait for anyone else to finish or to go ahead of you.

The Web is a solitary event in which one person is fully in charge of his or her destiny.

So...why do so many people dislike music when they log into a Web site?

I believe it's because the music is an element of mass. The decision to listen to music was made for you, not by you. That's a one-to-many method and users dislike it.

Oh, c'mon! Really? You mean people are so shallow that if I play one little piece of music without their complete approval, they will dislike the entire site and leave? Can people really be that way?

When music plays on a Web site, it usually occurs at one of three levels. I have examples of what I consider those three levels of annoyance.

Level One: Allow Me To Shut It Off

Here's a page by Clifford Green at http://expage.com/page/clifcoll. I don't know if you can see it or not, but there's a line there that reads, "Music off at the bottom of the page." 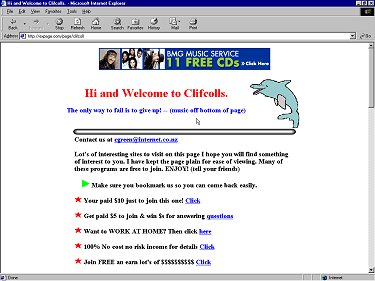 OK then. Let's scroll down. Ah, there it is. 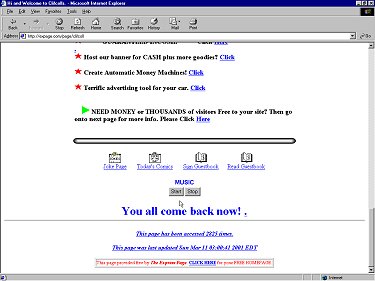 OK, I wasn't too fond of the tune but at least I was allowed to rid myself of the sound. I'm not a huge fan of having to scroll down the page to do it though. I would think that Cliff wanted it that way on purpose so I would have to scroll. There's some logic in that but it's using a negative to force a user's hand and that might not be the best method of getting something done.