One day I received a letter from the cable company explaining that they would be raising my rates by $10. I called and asked why. I was informed that I would have to now have a digital box to get the same programming I currently receive. "So," I said, "For ten bucks more a month, I get nothing more than what I get now?" She answered yes, and that was that. I was off to join the digital satellite revolution.

I have a Dish 500 system and the basic of basic cable for local channels. The entire package, including the basic cable, came for $14 less than what my new cable bill would have run had I paid the extra $10 a month.

Concept: Hey! Would you like a Dish 500 system? Debbie has them. Of course, you'll need to be in Utah if you wish to buy. I doubt Deb would send a truck out to the Bronx just to hook up a dish. 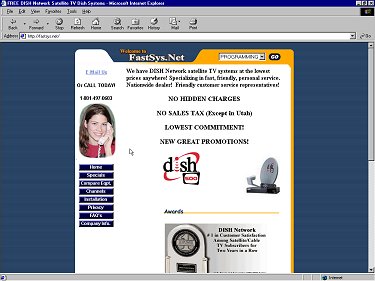 Praise: I like the color scheme of the page. I also like that Deb asks for the sale right up front. There's no question what the page is for. Deb sells and installs dishes. I also like that there's a photo of a person on the phone on each page. Some may think that's a little corny, but remember back when Time Life was selling those books on the supernatural and such? The TV commercials always greeted you with Jill, one of the Time Life operators. That was wildly popular in that it put a friendly face to the company.

The site seems complete. Every question I had was answered and I found those answers pretty easily. The navigation on the left is blatant and I liked it. I guess I could be real picky in that I dislike shortened words in navigation. You have, "Compare Eqpt.". Don't do that. Either find text that fits fully on the button, or don't shorten a word. Yes, it's picky which is why I didn't put it as a concern.

And speaking of concerns...

1. Concern: This is less than picky. Deb, there's no heading on this page. There's no one-line identifier. Even the title text doesn't explain the page very well.

I know you aren't the corporate page for Dish 500. I go to that page fairly often. It wasn't until I searched around a little that I found you were in Utah. I know your homepage says you're a nation-wide dealer, but is that really true? I would think most people would want to buy their dishes from a local company. I did.

Suggestion: You have a local service but have constructed a global page. Maybe I'm wrong and you sell and install all over the planet, but I would think the vast bulk of your work is in Utah. Think about possibly re-writing the pages so that it is titled more to the point. You are a dealer in Utah that can sell nationwide.

I say this because when someone starts looking to buy a system, they won't come to you first. They'll look at the dish page. Once having decided, then you come into play.

Title the page more clearly and change out the title text so that a bookmark is more descriptive.

2. Concern: I have a big concern about the navigation bar on the page. It looks very nice and rolls over well. The problem is that it is an applet. Dig this: 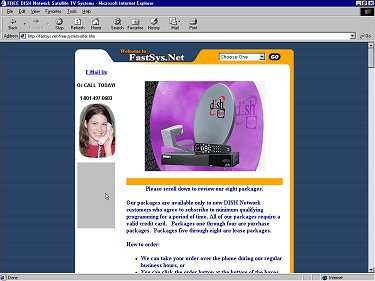 I clicked to go to a new page and the navigation bar simply showed as a gray box. The applet didn't load. Why it happened is a bit of a mystery to me. I would assume it has something to do with caching, but I'm not sure.

Suggestion: What I do know is that you can get the exact same effect using an image flip or text-based rollover. The text or image rollover method is better in that it is hard-wired and works if cached or not.