I get a lot of fellow professors that take my HTML classes. It's quite nice because other students are less likely to act up with a mess of professors sitting around. Just kiddingwellnot really. It's also nice because we can get into discussions that have real-world applications because many of these teachers are there to learn enough to post or better a university Web site. Many are there to better their personal university Web sites.

I got into such a discussion with a librarian who took the class. We looked over the library site and ended up asking again and again, What do we want this site to do? We then discussed how the site could be changed to accomplish what the site should do.

It's the same with today's site. When people make a Web site that is a representation of something that already exists, a library, a store, a newspaper, the audience will immediately have a mental stereotype of what the site should do, what it should be. A site that represents a radio station shouldn't be a place where people can do crossword puzzles. It should be a representation of the station, but not a total representation, just the best and most popular portions. Right?

We're going to talk about a very popular newspaper site today. The author informed me that there are 3 million page views by over 500,000 unique visitors each month. That's pretty good. It also tells me that the author has done his level best to first answer, and then implement that all-important question

What do we want this site to do?

Concept: Welcome to Charleston, West Virginia. By the way, those of you who giggle at West Virginia, should make a visit. I lived north in Pennsylvania, just above Maryland and visited West Virginia a great deal. It is simply a beautiful state filled with very nice people. I felt very comfortable in West Virginia.

If you were to post a Web site dedicated to representing a newspaper, wouldn't you try to follow the format that's already ingrained in people's minds rather than attempting to re-educate the audience? I would hope you would. Here's the online paper's homepage: 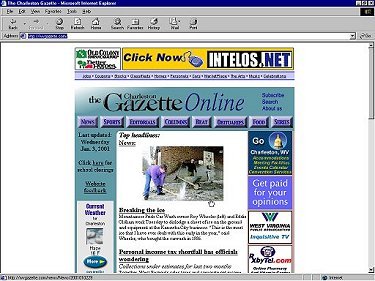 Praise: Look quick. Did you find what was important to you right off? I'll bet you did. The site is put together much like a newspaper. The main headline topics run across the top in nice bold buttons. I would even suggest that the headings are in order of importance. News is first, then sports, then editorials. That ordering alone shows forethought. Some might be wondering why the obituaries are along the top. You would be amazed at how popular obituaries are. I worked at a small radio station in Pennsylvania (WKST New Castle) and one of the station's most popular shows was two women who came in and read over the obituaries for the week. I'm not kidding! People listened to that show in droves. It's the same thing here.

The author, John, has made a point of emphasizing an element's importance by its placement on the page. The eye moves across a page from left to right, top to bottom. Thus, elements that are closer to the left and top are perceived as being more important. That's why I made such a deal of John's placing the headings in an order where the far left is most important. Notice the weather is on the left-hand side. Weather is pretty important. I might get that higher, but I think you can see my point.

There is a blatant thought process here. John has taken the newspaper stereotype and applied it to the Web with some success.