Here's one a lot of you might find interesting simply because of the author. I get letters now and again asking if I really have a Ph.D. and if I'm really a professor. I do and I am. These letters often want proof of my credentials so I send them to my university's Web site.

Well, for those of you who still want proof I teach, here it is. The following Web site is one put together by a former HTML student of mine. His name is Mike White and during his time in my class, he became a father. I don't know that that is relevant, but it's a nice piece of information.

Mike thought he was done with my grading his work, but he submitted the site for review, so here we go again Mike. Only this time it won't go toward your GPA.

Concept: The Phantom Voice Network is built around the character "Phantom Voice." That's the cloaked male figure in the upper right-hand corner of the page. There is a discussions page where readers can post and respond to writings. That's the mind of Phantom Voice. There is Web design, Web hosting, and the ability to have Mike make a few graphics for you. That's the design element of Phantom Voice. The site is held together with the thought process that all that happens is built around this character. I often state that offering too many elements on one site can be detrimental to the site, but in this case, Mike has found a way to glue all the parts together under the single umbrella of this character. 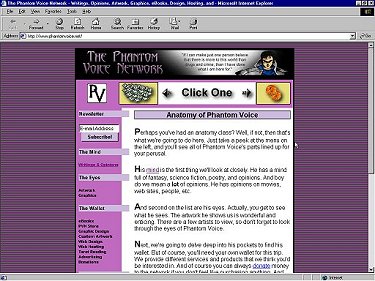 Praise: I have a statement that students might get a little sick of hearing. So Goes the Homepage, So Goes the Rest of the Site. Mike has followed that format here. When someone logs into a site, more than likely that person has come in through the front door, the homepage. That homepage sets the stage for the site. The images, the layout, the typography, and the colors are all set in the viewer's mind by the homepage. It is up to the site designer to then carry those design choices across the sub-pages. Mike does that well.

The format you see here is the format that every page on the site follows. The same graphics, in the same place, acting as a shell that surrounds the text that will change, found on the long white section.

I will again eschew the traditional Concern/Suggestion format to show you some successful points regarding Mike's page that you can possibly incorporate into your own site.

Point One: Look at the text in the upper left hand corner that reads, "The Phantom Voice Network." Often, new Web designers will find a new font on the Web, install it on their computers and then assume all other browsers will render it. Here's the truth, they won't. If a specific font is your bag, then do what Mike did. Create the heading using the font, and then turn it into an image. That way you are sure the font will display.