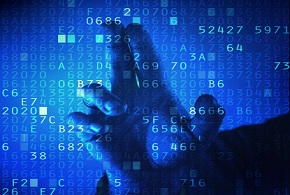 Among the myriad of new web frameworks, Vue.js has been among the most popular amongst developers. In fact, it’s the most popular JavaScript framework on GitHub, outflanking even React and Angular. Besides being fairly easy to use, Vue.js’s focus on the view layer makes it easy to integrate into big projects for front-end development without any conflicts.

I introduced the Vue.js framework to my readers in the Getting Started with Vue.js article. Now, we’re going to look at the structure of a Vue Component and build our own. The reason is simple: as the basic building blocks of your Vue app, Vue Components are what you’ll spend most of your time working on.

These component files ending in .vue are single file components. In other words, each vue file is its own component. A Vue file always contains 3 different sections:

If you open the HelloWorld.vue component in a text editor, you can make changes here that will appear in the app’s user interface. For example, you can modify the script to return a different message:

Save the file and execute the npm run dev command to see the updated app: 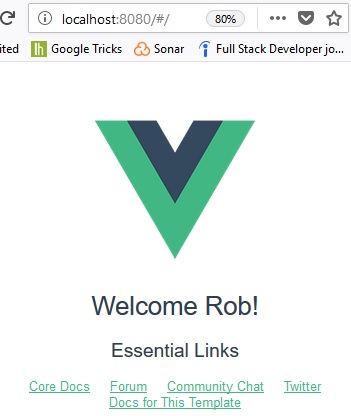 The default HelloWorld component is really just a placeholder, so don’t hesitate to replace it with something specific to your application. Here’s a component that I created named “MyMessage.” I saved it to the components folder as “Msg.vue.” It’s just a simplified version of the HelloWorld component. In a real application, it could contain significantly more code:

Now we need to include it in the main view. To do that, we need to import the file into the index.js file (without the .vue extension) and add the component to the routes array:

In single page apps, the document title can be set to a default or change according to the routing. Vue.js gives you the option to do both. By default, the default title is the letter “y.” There are a few ways to change it. One of the easiest is to include the created() event handler in the main.js file. It’s a JavaScript function that gives you direct access to the document.title property:

The assets folder contains the logo.png image that displays at the top of every page (the big V). You’ll probably want to change that to your own. You’ll find it in the App.vue file. Here is the template with my own image:

Go back to the app page in the browser and you’ll see the new title, header logo, and MyMessage component in their full glory (if you closed the page, you’ll have to reissue the npm run dev command from a command prompt and navigate to http://localhost:8080 in your browser): 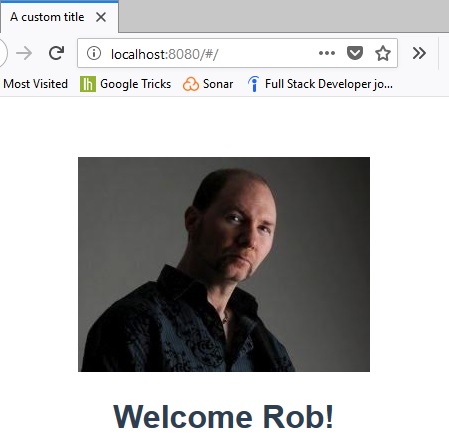 The contents of the project src folder are hosted on GitHub.

In today’s article we saw how easy it is to create your own components using the Vue.js framework. Of course, that’s just the beginning. In future articles we’ll learn how to handle events, bind data to form controls, and more!

Facebook
Twitter
Linkedin
Email
Print
Previous articleHow to Access a Single HTML Element on a Web Page
Next articleHow to Add Custom CSS to WordPress Templates
Rob Gravelle
Rob Gravelle resides in Ottawa, Canada, and has been an IT guru for over 20 years. In that time, Rob has built systems for intelligence-related organizations such as Canada Border Services and various commercial businesses. In his spare time, Rob has become an accomplished music artist with several CDs and digital releases to his credit.