How to Create a React Web App in Visual Studio Code

There are a number of JavaScript frameworks that promise to make developing web apps for both browsers and mobile devices easier, faster, and with superior results. Of these, a few have risen to the top of the heap, namely Angular, Ember, and React. Each has their idiosyncrasies that differentiates it from the others. For example, Facebook’s React is the lightest weight of the three, and focuses exclusively on the User Interface (UI).

This tutorial aims to kill two birds with one stone by familiarizing you with both the React JS library and Microsoft’s Visual Studio Code IDE. Originally, I had planned on using the Reactide IDE, but unfortunately, at the time of this writing, it is still in the works. That being said, we’ll create a basic web app using Visual Studio Code (VSC) version 1.24.x. It’s not only free, but boasts React IntelliSense and code navigation out of the box!

To confirm that you have Node.js and npm correctly installed on your machine, you can type the following statements at the command prompt:

We’ll be using the create-react-app generator for this tutorial. It’s the best way to start building a new React single page application. It sets up your development environment so that you can use the latest JavaScript features, provides a nice developer experience, and optimizes your app for production.

To open the terminal from within VSC:

This will take a bit longer. Again, you’ll get a progress report.

Opening the Project in VSC

With our app built, we can now open it in VSC. To do that:

Here is the loaded project structure in VSC: 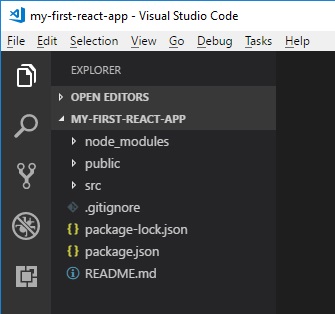 Taking our App for a Spin

True to its name, the create-react-app generator generates everything your web app needs. In fact, the app is perfectly runnable at this point. To view it, type “npm start” at the command prompt. That will launch the default browser with our app loaded at “http://localhost:3000/”: 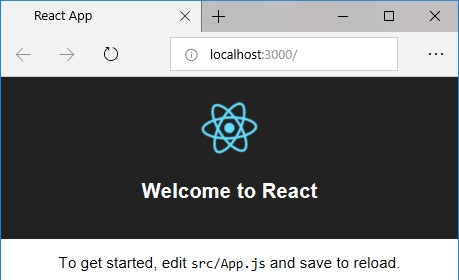 As you can see, React is arguably the easiest to work with of the popular frameworks. Now that we’ve got our app in a runnable state, we’ll use React to build an impressive UI in the next installment.

Facebook
Twitter
Linkedin
Email
Print
Previous articleSo You Want a Faster Web Site
Next articleIt’s Time for an HTML5 Time Tag
Rob Gravelle
Rob Gravelle resides in Ottawa, Canada, and has been an IT guru for over 20 years. In that time, Rob has built systems for intelligence-related organizations such as Canada Border Services and various commercial businesses. In his spare time, Rob has become an accomplished music artist with several CDs and digital releases to his credit.