Point Two: Mike has an advertising banner on his site. Contrary to what many think, I don't dislike ad banners. I dislike a lot of ad banners. Notice what Mike did with his. This is the correct method of incorporating a banner on your site. He nestled it into the page without giving it top billing. We know that importance is set by placement. The upper left-hand corner of the page is the most prominent portion of the page and any element placed there will be seen as the most important element of the page. All too often, new designers will put an ad banner top and center pushing the remainder of their site down. That puts the idea in the viewer's mind that the ad banner is the most important thing.

It isn't! Your page is the most important thing!

Mike has said, through placement, that his site is the most important thing. The ads banner is important, but it is of lesser importance than the title, character, logo, and design of the site.

That's how you incorporate an ad banner. It is support for your site, not the end all. Giving an ad banner top center billing only serves to push your site down and lessen its importance in the user's eye.

Speaking of the user's eye...

Point Three: Mike has set the width of his page to 600 by surrounding the content with a single table cell. He has also then centered the table cell. That way as the user's screen sizes increase or decrease, the page itself stays the same size and centers to the screen size. That's a good thing, but not what I wanted to point out.

Mike has gone as far as to be concerned about the background behind the page. He could have easily just used a flat color to surround the page on larger monitors, but he didn't. He put some thought into it and used a background image that actually leads the user's eye. Notice the horizontal lines. No matter where the viewer's eyes land on the page, the lines constantly keep acting as a road map to direct the user to continue moving horizontally back to the actual page. It's a little thing, but a wise choice.

Point Four: So...what was all that above regarding, "so goes the homepage so goes the rest of the site?" Well, Mike's homepage set some boundaries in the user's mind. It set the shape of the page, the colors, the character, and the logo. If he were to use different boundaries throughout the page, he might confuse the viewer, but he didn't. Once the homepage set the boundaries, Mike continued to reinforce those boundaries on each of his sub-pages. Dig this: 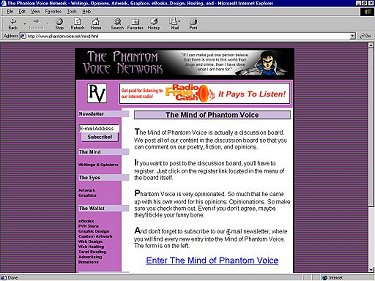 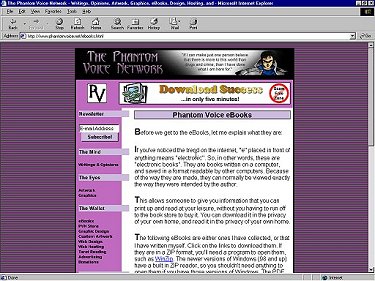 Notice the shell and the format is carried across the site offering consistency and reinforcing again and again that the user is within the same site and that site is marked by the color purple, a specific font, a specific character, and a specific logo. Smart.

Concern: Oh, yes. Mike knows he can't get out of my class without at least one concern. I pointed this one out to him the last time he stopped over. Here's the site in Netscape Navigator. 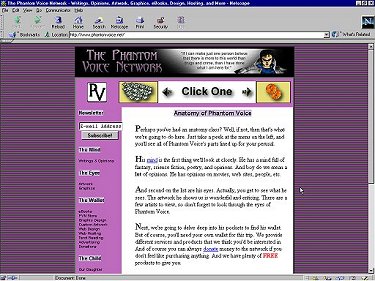 Notice that much of the font and navigation formatting is lost. That's because Mike did the majority of it with CSS commands Netscape didn't always understand. He said that the page rendered fine in Netscape 6.0. It did, but lesser versions don't play by the same rules. Oh well - get in there and hard code to get the effect.

Overall: It's "A" level work. Mike is the epitome of someone who takes design seriously. He leaves nothing to chance and every element on the page is thought out and placed there to make an impact towards the site's killer app.

Oh, one more thing. Did you notice that the first letters of the paragraphs in the homepage are all capped and in bold? Try reading them vertically. They spell out PHANTOM.

Always Remember: When it comes to designing your Web site, the most important person is not you, but your user.